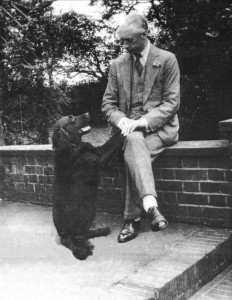 F. M. Alexander was born in Tasmania in 1869. He was an actor, but he began having trouble with hoarseness, which no doctor or voice coach could resolve. He reasoned that since there was nothing physically wrong with him, his problems must be caused by something he was doing, and decided to take matters into his own hands. Using mirrors, he painstakingly observed himself in movement, and especially in preparation for movement, and discovered that he was unconsciously interfering with his vocal production by tightening his neck muscles and pulling his head back slightly just as he began to speak. This in turn shortened and compressed his spine and constricted his breathing. Two key aspects of this interference were that while he could see the tightening of his neck and the consequent pulling back of his head in the mirror, he neither intended to do it nor did he have any kinesthetic sense that he was doing it. He devised an ingenious way of circumventing his habitual reactions, and replacing them with a new, conscious direction of himself that allowed his natural balance and coordination mechanisms to come into play. His voice problems were solved, but he realized that he had found something with implications far beyond voice production, and soon began to teach others.

He moved to London in 1904. His students there included playwright George Bernard Shaw, writer Aldous Huxley, the Archbishop of Canterbury, educator John Dewey, and many other well-known people in all areas of life. He began a training course for other teachers to carry on his work in 1931. The Alexander Technique continues to be taught all over the world today.

Learning to recognize unthinking, automatic habits and to replace them with constructive, conscious thinking has applications to both the physical and mental aspects of life. F. M. Alexander used the term “psycho-physical” to reflect his belief that there was no real distinction between the mind and body, that they are really two aspects of one whole being. He was well ahead of his time in this respect.

“Change involves carrying out an activity against the habit of life.”

“You translate everything, whether physical, mental or spiritual, into muscular tension.”

“We can throw away the habit of a lifetime in a few minutes if we use our brains.”

“You can’t do something you don’t know, if you keep on doing what you do know.”

“Trying is only emphasizing the thing we already know.”

“Everyone is always teaching one what to do, leaving us still doing the things we shouldn’t do.”